The Shadows of Abaddon mod currently adds a handful of new Biomes to the game, each with their own special Blocks, Enemies, and Items; some may even add a new Boss. This mod also adds one new structure to the game.

The Empress' Den is a dark, gloomy biome filled to the brim with spiders, found directly under the Underground Desert. Comprising mostly of Weaverstone and Venomite Ore, the player will need a Pickaxe with a power of 110% or more in order to break into the biome. The innards of the biome are comprised of multiple floating platforms of Weaverstone, with spider eggs and cobweb dotted about.

The Flame Razed Forest is a fiery orange and black landscape which generates after Abaddon, the Source of the Affliction has been defeated. The biome generally attempts to generate on the side of the world which holds the Dungeon; however, it may occasionally spawn on the side which holds the Jungle. The biome will also attempt to spread over most biomes, save for the Jungle and the Snow biome. This biome is not a large threat on the surface; only spawning the occasional Furious Slime. However, it gets much more dangerous underground. 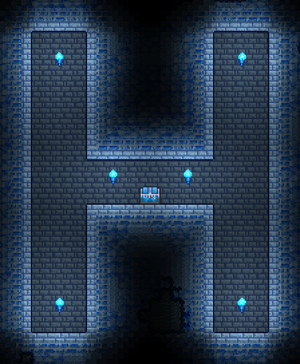 The Shrine of H is a small structure which will always spawn somewhere in the Snow biome. The structure is comprised purely of Ice Brick, Ice Brick Wall, and a singular Ice Chest in the middle of the structure. The chest always contains nothing but a single Charm of H.